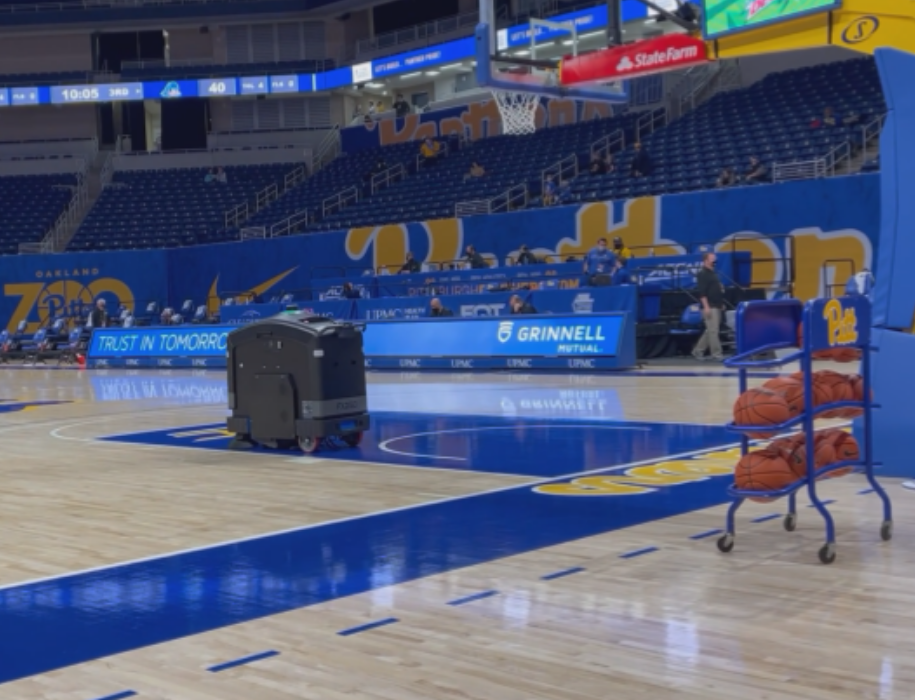 At Discovery Robotics we’re excited for March Madness! At this point, you might be wondering what autonomous robots and basketball have in common. Well, if you didn’t know, basketball courts are notoriously hard to clean with robotic equipment. It’s like trying to master a three pointer – backwards!

The challenge is the robot’s ability to know precisely where it is within the space. This is referred to as localization. Autonomous mobile systems need to know where they are at all times and simultaneously build a map of its environment. Without this, a mobile unit will get lost or repeat tasks in the same space, among other issues. Robots with localization and mapping abilities use LiDAR, sonar, cameras, and combinations of these technologies for successful autonomous navigation.

So Why Are the Courts a Challenge for Robot Localization?

Basketball courts are large, wide open spaces in themselves. Add sidelines, and you have even more open space. To get an idea of just how big we’re talking, let’s look at the University of Pittsburgh’s Petersen Event Center which is home to the Pitt Panthers Division I basketball team.

During a home game, you’ll find 10 players fighting it out for glory on approximately 9,840 square feet of polished wood. In that space, you could fit about 22 of LeBron James diagonally along the court! When the Pete is in a completely open configuration, the arena balloons to about 20,184 square feet. So, when we say wide open, we mean wide open.

Open space, and lots of it, usually spells trouble for effective robot localization. But why? It all comes down to the navigation sensors. The sensors feed information to the robot. The robot then knows where it is, or localizes, by using reference points. Reference points are any shape, object, or wall that a sensor can use to visualize a space. Early systems used magnetic strips or tape on the floor. Today’s systems are much more sophisticated. They use coded markers, long range acoustic sensors, inertial modules, wheel encoders, lasers, or vision systems.

Each of these modern techniques has its own challenges. Some struggle with long-term accuracy and require constant maintenance, LiDAR and sonar sensors have limited range, and visual systems (ex. cameras) don’t “see” anything in open distances. These limits in visual range present localization hurdles in open areas like basketball courts. Systems essentially get lost when the robots can’t detect any reference points.

If the robot were in a similarly sized hotel or conference room, it could see a wall, a support beam, piece of furniture, plant, or other structure to create an accurate map. Without these integral reference points, what’s a little autonomous robot to do with a big, bad basketball court?

Superstar in Robot Localization: The FX250

The FX250 uses a robot localization and navigation system developed by Discovery Robotics called “ISLAND.” ISLAND stands for integrated sensor localization and navigation determination. ISLAND intelligently uses multiple sensing methods including inertial, wheel odometry, 3D LiDAR, and vision to localize. The FX250 always knows where it is, where it is going, and how to avoid any obstacles along the way – no matter the room size.

The FX250’s slam dunk is its 3D LiDAR system. With no unique reference points near the basketball court’s floor, the ability to include location information from other points of reference like the ceiling and bleachers becomes critical. As we mentioned in our Brain OS blog post, the FX250’s LiDAR system is 3D instead of the 2D LiDAR sensors found in competitive products. The 3D LiDAR allows the FX250 to view its surroundings in all three axes with a 100-meter range. 100 meters = 109 yards, that’s longer than a football field! The Discovery Robotics team integrates all this information into the FX250’s localization and navigation system to achieve location accuracy of less than 1 inch!

Maybe you don’t have a basketball court that needs to be cleaned. Most of us don’t. But the FX250’s localization and navigation capability works wonders in any large space. This includes airports, convention centers, ballrooms, special event venues, casinos, distribution centers, or manufacturing facilities.

Discovery Robotics’ mission is to increase human productivity, safety, and quality of life by creating robotic solutions. Can we help you keep your floors clean and safe? Yes, we can! Learn more about us today. For questions or more information, please contact us at info@discoveryrobotics.com.